How to almost create the perfect gig experience

In order to enjoy the perfect gig experience you need:

1. A decent journey to the venue;
2. A good parking space – only applicable if you are coming by car or happen to be the train/bus driver;
3. A great venue;
4. Reasonably priced food;
5. Fantastic seats – very important if your gig companion is cute and can snuggle under your armpit but not good for them being able to see the stage when they are standing (please note that the offer of snuggling under my Armpit is only open to Mrs B);
6. Make sure you bring the tickets with you.

1. Check – Nafman took me directly to the venue. None of the usual trauma - it didn’t try and take me via Beirut, it didn’t dump me in the middle of nowhere and then decide to shut down for the evening. It didn’t even find the usual traffic jams it so normally excels in finding.

2. Check - Found a space less than a minute’s walk from the venue – when does this ever happen…….?

3. Check - Cadogan Hall just off Sloane Square. Intimate and atmospheric. None of your 120,000 "Can't see the stage from here" venues (Thanks Oasis - it might have done your bank balance the world of good, it might have been a world record crowd but in my opinion if you can only see the top of the stage it is a sh*t event....)

5. Check - Front row gallery seats about 20 feet from the stage. The seats were comfortable and roomy too – whoo hoo. 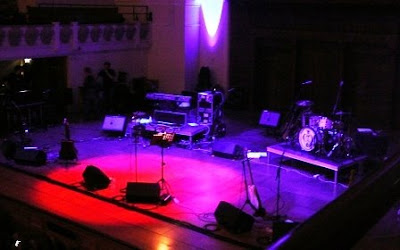 6. Check – Tickets safely in wallet (wallet with me).

1. Mrs B arrived 15 minutes before the start – with her current workload, this is a novel experience. She normally arrives 20 minutes into a gig and we spend the next 20 minutes texting each other in an attempt to fight our way through the crowd to get together.

2. I hadn’t realised that there was a support act….

In an ideal world this Blog would end happily, at this point, as we enjoyed a wonderful evening……. but sadly this is BlackLOG

The fact that all the boxes ticked so neatly should have been a clue.

The non-rowdy crowd were not the normal type for this kind of gig - Some people were in suits - this should have sent alarm bells ringing.

It was only when the support act announced that he was going to play his entire new album did I start to worry. Just how long was he going to play for? I checked the ticket - it said “Roddy Frame (formerly of Aztec Camera fame)”

Mrs B asked to look at the ticket.

Mrs B started laughing and pointed at the date.

I looked at the date.

I looked at the date on my watch.

I looked back at the date on the ticket.

I started to laugh – I had no choice. It was either that or I would have started crying.

We were 24 hours late. Numb nuts (that being me) had written down the wrong date on our events calendar at home. Unfortunately, whenever I checked when we were going I referred to the calendar not the ticket. The event we had inadvertently gate crashed was Tony Christie and since he was not showing any sign of playing “Road to Amarillo” we attempted to slink out. Typical of our turn in fortunes, we didn’t make a clean get away…

Member of staff - Leaving a bit early aren’t you?

I felt like I had kicked myself in the gonads (probably accounts for the numbness element). If anyone saw the Paul Merton trip through India – where the little Indian chap got people to run up and kick him between the legs - I now know exactly how he felt, particularly as it was effectively self-inflicted. Personally, I think he was actually enjoying the experience. I can assure you, I was not. 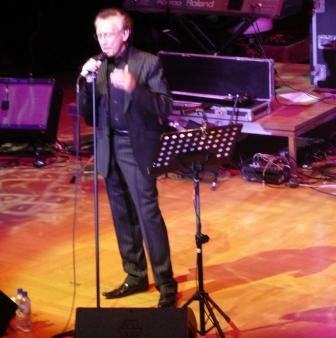 I feel that my guide to the perfect gig experience is possibly lacking a little something….

You may ask why am I admitting to this act of stupidity? To be honest, it is a selfish attempt by me to exorcise the ghost of this event. No matter how much you laugh or pull my leg about it, you can’t hurt my feelings anymore than I have hurt them myself. This was the opportunity to see one of my favourite singers in an incredibly unique event. A part of me will regret this act of stupidity to my dying day.

There are some questions that may require a government inquiry to get to the bottom of:-

How did we managed to get through three separate ticket checks…..?

When will they invent time travel so I can rectify this hideous mistake?

If we are not getting time travel, what about BBC iPlayer for concerts? This would be useful even if you made it on the correct day. Want to go to the toilet? Need a drink? Just hit the pause button…..Come on boffins pull your fingers out………..

If there is a glimmer of an excuse that I can cling to for this catastrophe, it is possibly I can blame fixture congestion. 4 gigs in ten days is a lot even by my standards. This was the second of the events, which had kicked off with The Wombats. I had to blackmail my friend Kirsty into joining me, after Mrs B objected to the congested schedule and decided she was only prepared to participate in two of them.

Nafman was on his worse behaviour and spent every opportunity trying to drag me into the congestion zone.

The support band were really good but never gave out their name, or if they did, I didn’t hear it. The lead singer had more hair than common decency should allow. I suspect he was actually sporting more hair than I have ever possessed in my entire life. They did a terrific cover of a song that I just could not place. How embarrassing when I found out later the group were Team-Waterpolo and I actually own their entire released back catalogue (may be I do have too much music) consisting of 4 songs. It turns out that they had, in fact, done a terrific job of covering their first single, personally I thought it was much better than the original……

I'm not sure that even if I counted all the hair I have ever produced, I would be able to compete with the lead singer of Team-Waterpolo


If you can judge the age of the crowd by the props they carry, then the day-glow sticks put the average age of the audience at about 12. Which would have been good for viewing except they had brought their parents along (for you statistic fans out there, I have excluded the parents from the age statistics as it interfered with the result I wanted. Well, if the government can do it for inflation purposes……... Food - it’s gone up: better exclude it. Fuel has gone up: better exclude it. Electronic goods have gone down: OK we can include them…… )

The Wombats could have been good, should have been good and, in parts, they were. The problem was that they came on late, left early and spent ages in between songs wandering around doing very little. The result was a disjointed set that kept stalling and never got going. Having seen them at last year’s V festival, where they had a 30 minute set, I thought they were very good. Reading between the lines it would appear that with only one album’s worth of songs, the Wombats were desperately trying to eek out the set and just not very good at it. I hope Kirsty enjoyed the evening and has just about forgiven me for my underhand blackmail technique. It could have been much worse, after all I took her on the correct day to the right venue…….Two gigs to go on my 10 day congested tour, Razorlight and Scouting for girls Will they go well? Will I even make it? ….tune in next week to find out…..Don't forget to drop into the "BlackLOG - Historical" should be updated in time for Thursday morning. 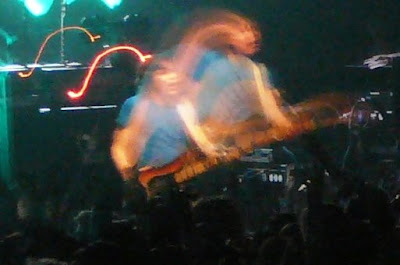 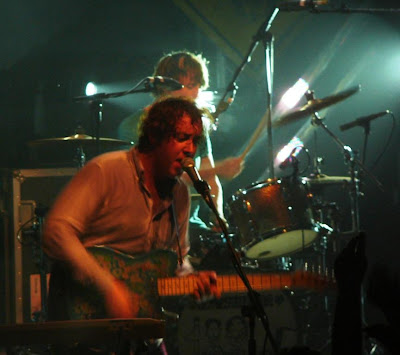 It ain't over till the fat Wombat stops singing
Posted by BlackLOG at 22:08


This is just your opinion so feel free to say what you like...

Who are you and where are you from?

Around the world in 80 Blogs